AMC and Lehigh University Partner on the Highlands Trail

The Appalachian Mountain Club has once again partnered with Lehigh University to produce interpretive signage along the Saucon Rail Trail.

Geology Along the PHTN 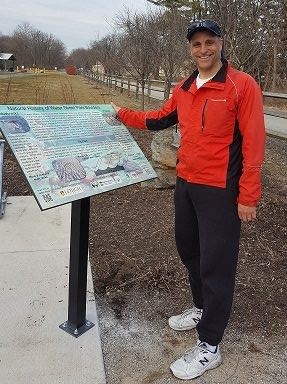 In the summer of 2016, AMC contacted Dr. Frank Pazzaglia, professor of Geology in Lehigh University’s Department of Earth and Environmental Sciences, to work together on an interpretive sign project on the Pennsylvania Highlands Trail Network (PHTN). Dr. Pazzaglia selected a student to research and design the new sign (shown below) during the 2016 fall semester. After considering several local geologic formations, Dr. Pazzaglia chose Water Street Park in Hellertown, the site of boulders that date back to the Late Cambrian Period (515-500 million years ago). The sign was installed on February 22, 2016 on the southeast side of Water Street Park, adjacent to the Saucon Rail Trail section of the PHTN. Using the sign, park and trail users are able to locate fossilized stromatolites and other ancient formations in the boulders.  A QR code provides more information about the boulder geology. Lehigh University and AMC are already planning their next PHTN interpretive sign project to be completed in early 2018.