Trail that the Highlands Trail route co-aligns with are shown on the interactive map in teal blue. Trails that are under construction are shown as solid yellow lines, trails that are planned are shown as red dotted lines, and trail gap areas are shown as grey dotted lines. For trail information, click on the trail and follow the link to that trail’s page or click on the corresponding trail picture below the interactive map. Clicking on the grey park and recreation area icons on the map will provide more information about each resource.

Click here to view the map in full screen in a separate window. 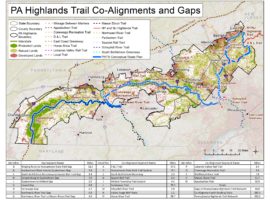 The online campaign, Protect the View, seeks to build awareness and support for the protection of trail views and experiences within the greater Philadelphia area’s Circuit Trails network.  Read More

A ribbon cutting ceremony was held in Richland Township to celebrate the opening of a new section of the Highlands Trail in upper Bucks County. Read More

PA Outdoor Corps in the Highlands